I’ve been told that when I was very young, I would sometimes sit in the field behind my Grandmother’s house, hitting on plastic bottles and singing “Let it be” by the Beatles. Mrs Byrne, a retired music teacher who lived next door to my Grandmother, would tell my Granny that she saw some ability in me. I have no memory of this, but it’s a nice picture to have.

When I was maybe 7 years old and in second class, there was a piano in our class room. Every now and then our teacher, Mr. Bruton, would play on it and sing songs for us. I remember two of the songs that he would play – “It’s a working man I am, and I’ve been down underground and I swear to God if I ever see the sun…” that was one of the lines but I’m not sure of the writer, I could google it of course, but I won’t. All that mattered then was the song and that’s all that matters now. The other song was “Streets of London” the writer of which I feel I should know… or that I knew once but have now forgotten… Charlie something maybe? [It was Ralph McTell] It was good to have music in the classroom and a teacher that would sing for us. I don’t think any of my other teachers sang. This memory has stayed with me a long time so it obviously had some impact. These are the small seeds that grow into a great love.

That teacher lived on the same road as my Grandmother and would often bring me home after school. In his car there was a tape that had some of those songs on it and he would play it sometimes on the way home. He was a kind man and a nice teacher. Once time he loaned me money so I could buy fake cigarettes from the joke shop in the town mall. It seemed very important that I have these cigarettes and evidently he understood and handed over the money. I hope that I paid him back. Much later on I ended up playing music with his son Cani Bruton. Cani was another fine human being and played on my first two albums “Wood” and “Sleepless Street”. He died suddenly three Christmases ago. 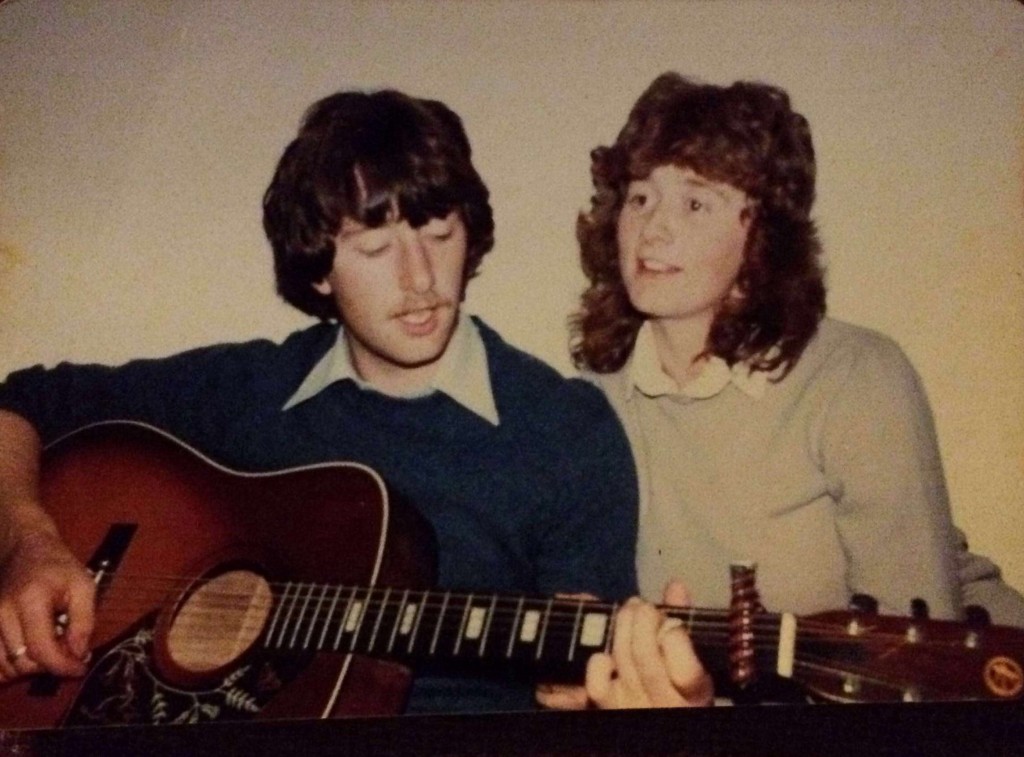 My Father wins my Mother’s heart with his sweet sweet music. A year or so before I was born. 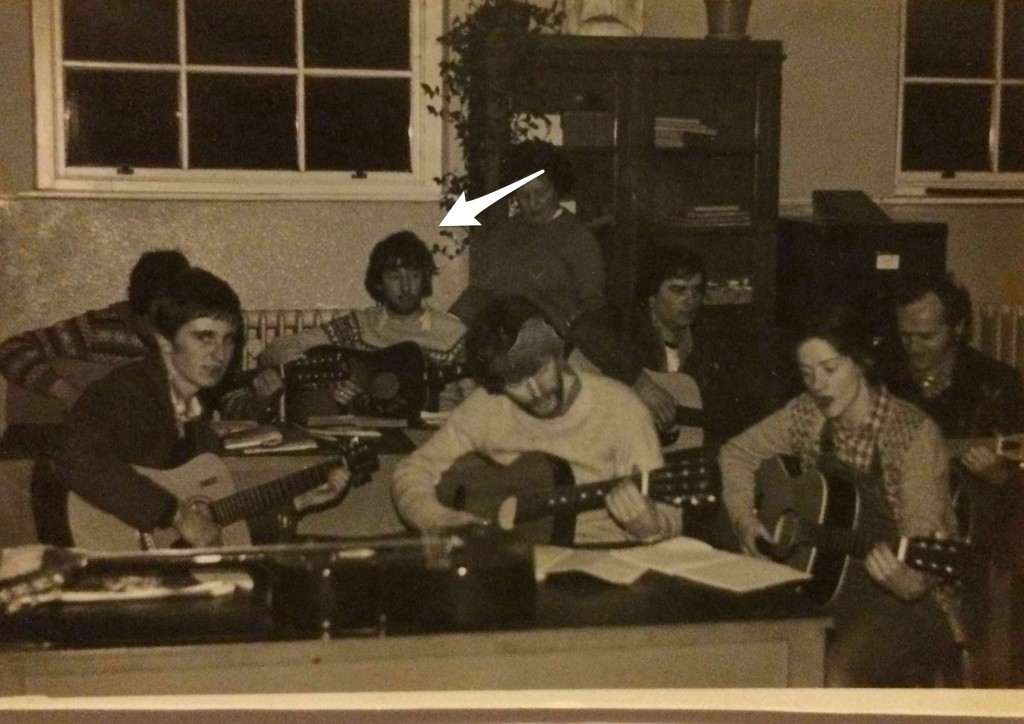 My Dad, before he was a Dad, owned an acoustic guitar. He even wrote some of his own songs and recorded them on a small machine with a built in microphone. I remember the cassette was dark grey plastic with a red sticker on the front. It was a special thing and I liked listening to it. Daddy was still playing guitar in the period when my Mother was pregnant with me, but he gave up right after I was born. Your priorities shift when you have a child it seems. When I think about what may have shaped or influenced my own story and interest in music I can’t pass over the fact that my Dad was writing songs around the time I was brought into the world. Surely some of that creative spark found it’s way into me. 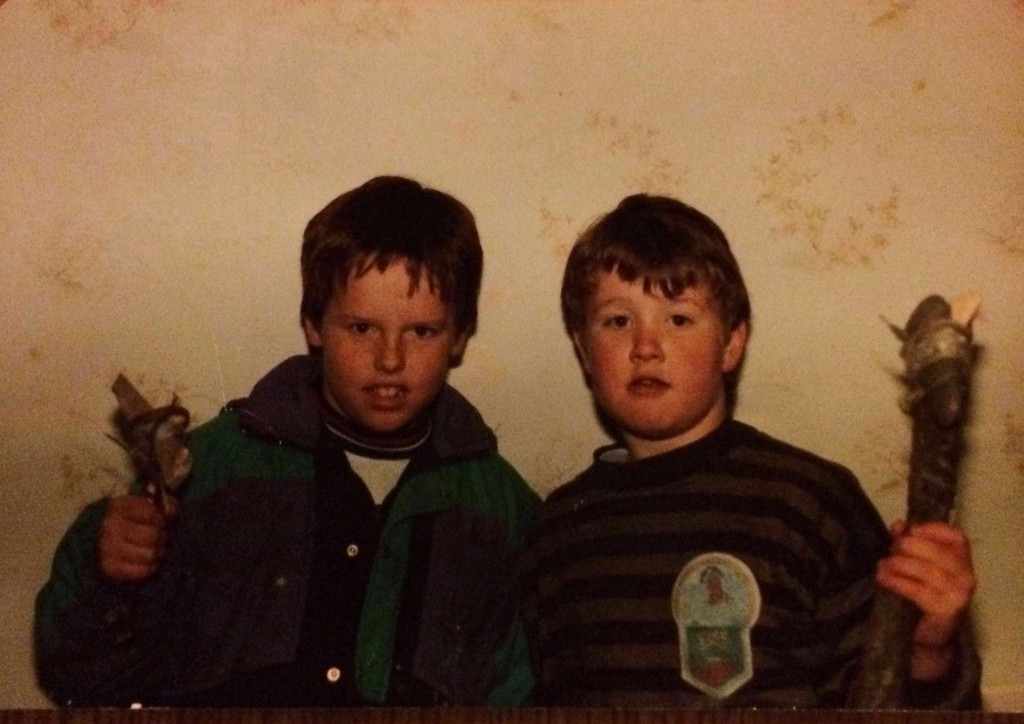 “We ain’t no fools”… Making stone-age era weapons with my best friend Shane. This is probably a little before we got into Metallica. But these memories would have inspired the song “The World is Wide”.

I first got excited about listening to music when I was in 4th or 5th class in primary school. That’s when I remember first being aware of certain songs and certain bands. When you had a band you liked you would write their names or draw their logo on the front of your books. Sometimes even on your school bag itself. If you were really dedicated, there were patches you could buy with your favorite band’s logo on them, and you could sew these into your jacket. Branding I tell you! My best friend at this time was Shane O’Connor, he lived 4 doors down from me and we were thick as thieves all the way up through primary school. Shane lived next to an older boy Paddy Kiernan. Paddy had tight dark curly hair, wore a Metallica tee shirt and was music obsessed. He knew that Shane and myself were starting to get into music in a big way and must have felt it was his duty to guide us in our musical development. One time he gave Shane a copy of The black album by Metallica, Shane would get the first listen and then pass it on to me.The Black album was released in 1991 so that gives some clue of the time frame, I’m sure he was only giving us the most current and relevant releases! I listened to the album in the dark with headphones ( I must have had a walkman) and I loved it! Thinking about it now, The Black album was a good choice for us, it was edgy enough to impress us but not too dark for an 8/9 year old to listen to. As far as metal goes there’s some fine songs on there! Actually, as far as any genre goes, they are great songs.

Paddy was also big into super heavy bands like Cannibal Corpse and Sepultura at that time, real dark dangerous music written for and about devils. He did well not to give us those tools for devil worship. Over the years Paddy would play a huge part in developing my love for music. So as I began my life as a fan of music I was convinced metal was the genre for me. The first album I ever bought was Metallica’s “Master of Puppets” on cassette tape, which I still have somewhere. No doubt I was influenced by Paddy’s tee shirt. I’m a sucker for advertising. Metallica had a great logo too. Yes they were the band for me.

The other band I really liked was Guns N’ Roses. I think most people of my generation had a soft spot for G N R at some point in there life. I loved the video for November Rain and Axl Rose was my hero. I had a live concert video that I would put on and then run around in my underwear singing into an imaginary microphone. I thought I was Axl Rose and that I too was “on a night train ready to crash and burn”. Music has a way of getting under a boys skin.

This was all before I started playing an instrument, but my interest in music was deepening. There was always music in the house. My parents were both music fans and would listen to bands like Genesis, Pink Floyd, Queen, Marillion and some Led Zeppelin too. I can remember Daddy watching music videos (on VHS) when doing the ironing. I don’t think the man has ironed in 25 years. It’s a hard habit to keep. But the memory is there. Music music all around.

My early music education was definitely on the heavier side of the musical spectrum. I had a Slayer tape too and a couple from Pantera, “Seasons in the abyss” and “Cowboys from Hell”. It was pretty dark and angry stuff to be listening to pre-teens but I think it did me good to get all this aggression out before my teenage years.