A Film-Maker, A Songwriter and a Grandmother walk into a Room…

Last month I had the pleasure of spending a day with Myles O’Reilly, an Irish Film-Maker whose work I’ve been a fan of for a long time. I knew that good things would come from the day but the resulting 11 minute film is greater than I could have ever wished for. I am so excited to share this with you:

“Brilliant 11 minutes. So much more than a music video. Bone-marrow Irish but some how also Universal. So Fine.” – @Stilpix via Twitter

The film opens at my Granny’s house. The woman is an absolute hero and this is her at her best. She is 86 years old and bursting with humour, warmth and energy! None of this was in the script for the day but I’m so glad we popped in to say hello! After being served rhubarb tart, ice-cream and a cup of tea we went to the front room where I played her favourite song “Little Room”. The second half of the film takes place outdoors in the glorious Irish countryside at the place where I recorded the new album and includes a performance of new song “Tug”. 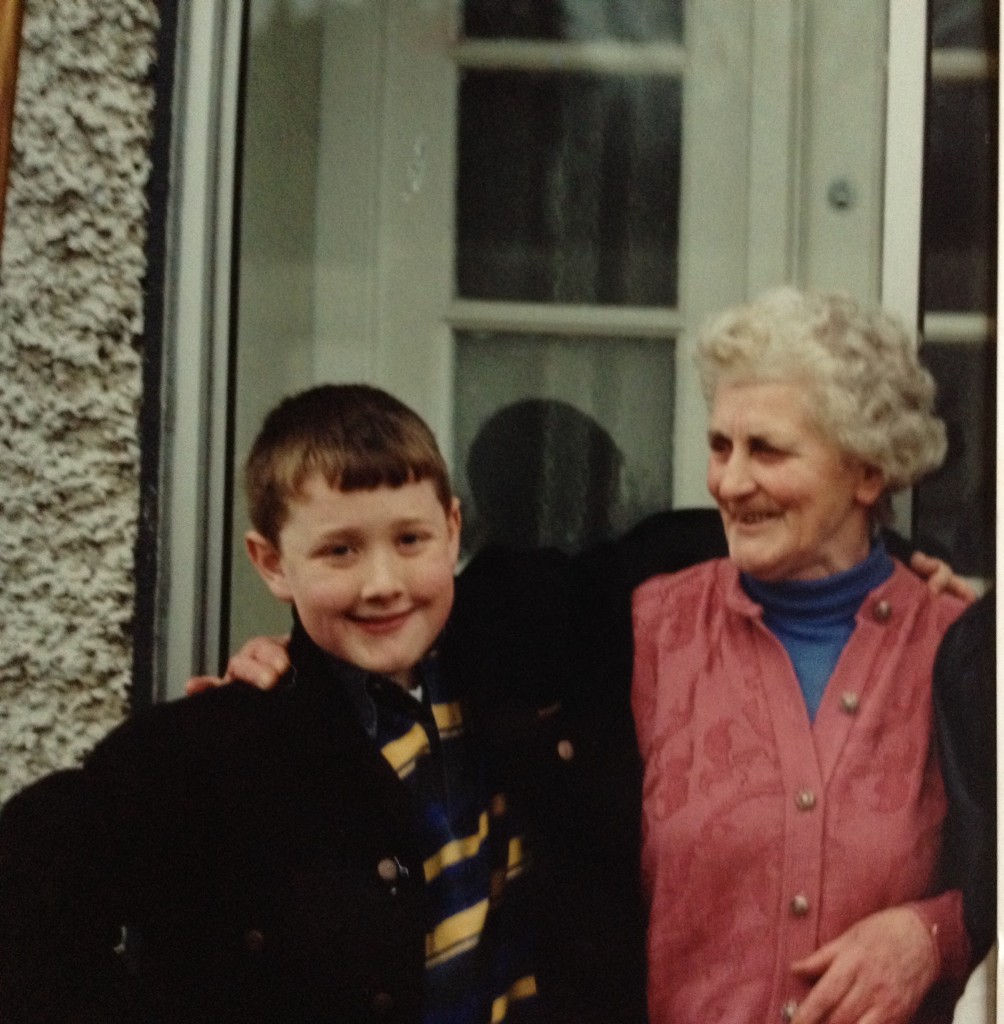 If you enjoyed the film and want to know a little more… Here is my detailed journal entry (I use 750words.com for my journal-keeping) from the morning of July 22nd 2014, the day after filming. I hope you enjoy this extra insight into the making of the film.

“Oh how I slept! Long and deep was my slumber. Maybe too long , too deep, for I am still a bit sleepy feeling! I went to be at around 1:45 am and slept until after 11 am. That’s some mighty sleeping. Good to get it. I woke briefly around 6 am, and there was some amazing sunlight happening outside the window, T and I looked out on it and it looked very beautiful indeed. I was even tempted to just get up at that point and enjoy the morning light, but I was too tired for that. My waking has been not too early lately, but I’m making sure that I get sufficient sleep which is also very important. I am on the balcony now, with a single shot of espresso on the table and a 750ml bottle of water at my feet. Coffee and water, two cornerstones of any day.

Yesterday was a beautiful day, one of the finest ever I’ve had. I got up a little earlier than today and got some basic good work done. Reading, writing , walking, tidied kitchen etc – then headed over to Arbutus Yarns HQ to pick up Myles to go a video-making. We had a good old chat on the road down to Mullingar and the time was passed very pleasantly. We listened to Fionn’s “100 acres of Sycamore album”, which is one of my favourite records by him. When we got to Mullingar, I had a guitar in the car that i needed to leave at my house for a cousin of mine. At the last second, I decided it might be better to drop the guitar at Nannie’s house, I figured it might be a more suitable collection point for Paddy. When we got there I asked Myles if he’d like to come in and meet my Granny… he said he’d like that so in we went. I left the guitar in the front room, where nanny was sitting and enjoying the coolness of the room. We chatted for a couple of minutes and were pretty much ready to go. I had turned down dinner and tea because we were eager enough to get on the road and get to work. I had the half suspicion that maybe Myles wasn’t comfortable there and wanted to get on the road. my suspicions were incorrect. When we were almost ready to leave, Myles asked if I’d maybe like to do a song in the front room there. I hadn’t even thought of that, but he spotted something magical about the house and Nanny that he said he’d love to get on camera. It seemed like a fine idea to me, so we went back out to the car to grab all our equipment. “Your Granny’s amazing” he said, he loved the house, everything, and asked if I thought she’d mind being filmed. I said I wasn’t too sure how she’d feel about it, but if he was subtle enough he could probably get some cool moments of her. So we went back in, and seeing as we were going to stay a while after all, we took up the offer of rhubarb tart, ice-cream and tea. it was lovely.

After having a bit to eat, we went back into the front room and I played “Little Room” which is the song nanny had asked for. I think Myles got some good chats with her on camera too before that. Halfway through the song Mary came in and sat down. To be fair she didn’t react strangely to the camera so we got to keep rolling and finished the song out. I sang it with nanny sitting right beside me, it’s really nice and Myles was absolutely delighted about it, very excited. He said that Nanny was of the old stock, an original, that she must have seen all the Greek tragedies repeated out over the decades. He picked up on too, how there was a certain amount of pressure on me to become “famous”, that it was clear that she wanted me to do well. There’ll be a little of that in the video too, I bet it’ll look stunning when he gets it edited and whatnot. very exciting.

We wrapped up there and got on the road immediately for the Boathouse. The drive out was cool and Myles got some great hedge-shots, practically hanging out the window with the camera as I drove along. The weather was pretty good, slightly overcast but nice nonetheless. Myles was pretty excited about the location. Immediately, when he looked down from the barn to the lake he said “Right we’re going to film you walking down that path to the lake”. So that’s what we did. He taped the microphone to my guitar strap and we began. I sang and played as I walked, heading from the top of the clearing down to the lake. With Myles walking either in front of me, or behind, sometimes to the side. Circling me basically. On the first attempt, as we neared the pier (That’s not the right word but close enough) Myles was walking backwards and fell into a hole in the ground there, thankfully there was no water and he was not hurt. That would’ve been bad. This first run wasn’t bad, except the song was over before we reached the lake, and of course there was the falling over incident! We decided we’d go again. The second take I think was better, but I think we got the distance wrong again, and fell just a little short of reaching the lake. the third time was the charm, we got it just right, and it was a decent take too.

(It’s getting breezy now, I’m going to pop inside for a jumper). Oh dear I just walked into the balcony sliding door! Therese must have done far too good a job cleaning it. Or maybe my mind wasn’t fixed properly on the task at hand – getting from the sitting room to the balcony – bang! Straight into the door I walked, like some kind of overgrown stupid fly. Oh well I wasn’t travelling all that fast so it’s no problem! I smeared my banana against the glass and hurt my nose a tiny bit. oh the shame! Anyway, back to the story…

We had pretty much got the thing wrapped up and were planning our next move, when the sun came out from behind the clouds and lit up the day. Myles looked at me and said “That’s a game changer”, basically, everything was different now, the light had changed, and we are at the mercy of thel light in these situations. It calls the shots really. We had no choice but to go for one more take. The sun was appearing and disappearing behind the clouds, it shone for no more than a minute or two at a time and we must have spent over 30 minutes just waiting for the right light. Eventually we got it, and we did the take again. Everything worked great. We had it down by now, timing , performance , everything. On this final take, the light looks so gorgeous, and it really comes out at the end when I reach the lake. I think I sang well on this one too. it’s going to be amazing. It was “Tug” we were doing the video for, which has some intricate enough picking parts, but thankfully I managed to do a pretty good job (I hope) of walking – playing and singing. I’m very very excited to see the results.

Aside from the song video, Myles got some interview type bits with me and some cool shots of inside the barn too. Lots of close ups of the curiosities there that will be cut between the interview and some parts of me singing “DO”. I think it’s going to be absolutely fantastico! I’m really excited to seeing it all being finished and edited. It’s such an honour to get to finally make a video with Myles, and be part of that family. It was great to be able to bring him to such a magical place too, and make a video together, simply, just the two of us. very relaxed and in the same vibe as the album was made. Mighty times.

We wrapped up and said goodbye to John, thanked him for the tape (for the mic) and of course the use of his paradise location, and hit the road. I had suggested getting some nice food, Indian or something, but Myles wanted to get back on the road to Dublin,as he still has quite a lot of editing to do on the Frames live video. We dropped my speakers back to Clonmore. I made us coffee, introduced Myles to m’parents and then got on the road again. On the way back we talked music and family and work. It was really cool, and one of the most enjoyable days I’ve had in a long time.”

«Have you heard Alela Diane?
»The World is Wide
Back